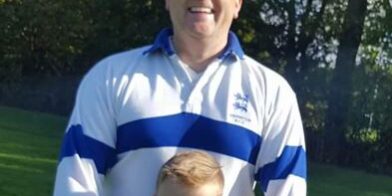 When I was asked to put a memoir together about myself and my history with the club I was a bit taken back and began to think about what to write. Those that know me will know I’ve got a big mouth on the field but when it comes to talking about myself it is most likely not my strongest attribute but here goes.

Me coming into the game of rugby was by a conversation during a dinner break at work with a colleague who became one of my best mates during that time, Glen Eager. Glen was playing for Erdington at the time and grew up with rugby as his dad Robert was a key player for Erdington over the years so Glen had watched his dad play as he grew.

During my school years at the age of 12 I took up boxing which I continued to do until I was 17, at the time of leaving school as happens sometimes, I fell in with the wrong crowd and was easily lead down the wrong path. I began to smoke, drink and gave up training completely which took me down the wrong path but one I learned from.

Luckily for me I got pulled out of the world I was in and when I was about 20ish I wanted to get back into some sort of training. I went back to boxing, but I just couldn’t get back into it. I tried football but disliked most of my own team because of the way they were in and out of the game it just didn’t click for me, then one lunch time talking to Glen he mentioned Rugby.

I had no clue about the game, it’s rules or even how many players it had. So, Glen decided to draw me a lovely picture of the positions and numbers of each player but then began to talk of scrums and flankers, my mind was again thrown into turmoil, so I asked myself ‘who would play a game like this’.

In the season of 1991 at the age of 20 I played my first ever game of rugby, I played for the 4th team on the old 4th team pitch. I had no clue whatsoever of what to do, where to stand for a kick-off or the rules of any part of the game. Spence who was the skipper at the time said to me, when someone is running at you with the ball stop them, if you’re running with the ball run that way and don’t get caught. I favoured the open side flanker position as you had the best of both worlds, mix it up with the forwards but loose on the scrum to get up and make them critical tackles.

After that one game I was hooked. Why was I hooked? The respect the game demanded and that you’d just spent 80 minutes trying to beat the hell out of another team but after you were having drinks and laughs with that same team. I remember kicking a ball once and Spence pulled me to one side and said “Tez we don’t do that in this game” We never kicked forward back then but as we know it can be a key part of any professional game so I’d like to think I started that change.

I did move away and went off to do other things in the world so didn’t play for the club from 1996 until my return in 1999 and I only wanted to play for one club. I played until I got injured towards the end of 2002 where I damaged my neck and shoulder, the following year the club house was unfortunately destroyed seeing the club close.

Through the power of social media, I was over the moon to see that some of the old club members along with a few new faces were looking to get Rugby Union back into Erdington. It started with me bringing my lad down for the kids’ sessions and as you can expect I did get dragged into a few games for the seniors, but I knew it was time to hang up them boots as a player. 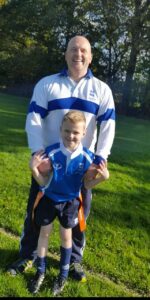 When Erdington came up with the project ‘Changing Lives Through Rugby’ I knew my time as a player need to change to a teacher. I have experienced first-hand how easy it is to fall in with the wrong crowd and get drawn into a world of destruction for yourself and others. This motivated me to be a volunteer in 2007 which I still do today but in other areas and, after my son was born 2013 with a severe lifetime health condition that life changing experience convinced me to what is important in life, so I was driven to be a coach supporting the kids of Erdington and surrounding areas in the hope we change the life of just one kid and bring Rugby new life in Erdington.

I thoroughly enjoy my time supporting local kids, parents, and the club.

I would just like to finish by thanking all the current volunteers we have at Erdington; we all play a big part in the club’s further development, and I know my contribution is a small part of what many others do every day.

Thank you to all the parents that take the time out during the week and on a Sunday to bring your kids down to the club, hopefully we do you and them proud by forging the next England line up.

A big thank you to Terry for his story. If you enjoyed your time with ERFC and want to share your story please get in contact with us at  [email protected].